The State: From the classroom to large-scale manufacturing, Nephron and USC unveil a new robot 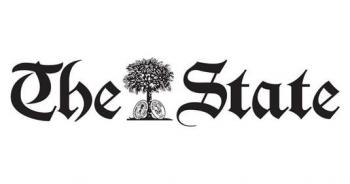 Two years ago, Nephron Pharmaceuticals brought a problem to the engineering and pharmacy colleges at the University of South Carolina.

When employees operating machinery at Nephron called in sick or otherwise couldn’t come to work, production is halted. Nephron CEO Lou Kennedy hoped the company and the two colleges could find a solution.

Kennedy is no stranger to the university, having graduated from USC. She and her husband Bill also established the Kennedy Pharmacy Innovation Center in conjunction with the USC School of Pharmacy.

However, she had not been a part of a collaboration with the university that actually shifted the way the West Columbia drug manufacturer operates.

After several classes of mechanical engineering students and pharmacy students worked to fix the problem, the project was finally completed this year— a robot named Smithers after The Simpsons character. The robot improves productivity by cutting out most of the human involvement in pre-filling sterile syringes with injectable medicines.

While Nephron has faster robots than Smithers, they require more human intervention.

“It just continues to make drugs without, frankly, a bathroom break or other things. So a steady machine, even if it’s slower, is better than people who haven’t shown up for the night and we have orders to fill,” Kennedy said.

Despite increased automation, Kennedy said employment will not be hurt. Nephron is currently in a hiring surge, trying to fill 380 positions including sterile pharmacy technicians and automation engineers. This year, Nephron will open its state-of-the-art vaccine production facility as part of a $215 million expansion.

“I can’t hire enough sterile pharmacy techs for what I need fast enough because of our growth, so this is just augmenting what we’re already doing— not to replace humans,” Kennedy said.

The robot consists of four pieces of equipment, all designed by students, that work together to mimic the actions of a human pre-filling sterile syringes, according to Nephron’s chief of engineering and USC mechanical engineering professor Ramy Harik. Separate pieces pick up the syringes, complete the filling process and cap the syringes to seal them.

Harik led three different teams of senior engineering students over two years to create the robot, while pharmacy students made sure the medical and sterilization aspects of the robot was safe for future human injection. The teams tested nearly ten different designs before finding one that worked.

The machine, which was installed last week, is being validated for commercial use and should be up and running in a couple of weeks, said Kennedy. She has already ordered the parts to make another one to put into production and hopes to have several of them going at the same time one day.

“My dream for the university is that we could commercially market these robots for hospitals around the world,” said Kennedy. “If we had the ultimate dream, it would be to sell these and a portion of the proceeds go back to the pharmacy and engineering school and allow us to endow a scholarship for future research.”

From the partnership, Harik created a pharmaceutical manufacturing class at USC for the next semester, and Nephron donated the equipment needed for students in the form of a glass cleanroom. The room allows students to work in a sterile environment for pharmacy manufacturing.

“Usually an entry-level engineer wouldn’t be given the opportunity to build an entire system from the ground up and it’s just been a great opportunity,” said John Diamond, one of the engineering students who started the project and now works at Nephron.

The entire story by Laurryn Salem is available here.