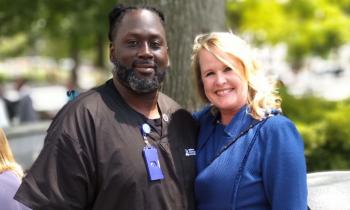 Travis Childs was a security guard at a Columbia-area pharmaceutical company five years ago. On Thursday, he met Ivanka Trump.

Childs’ rise from patrolling the grounds at Nephron Pharmaceuticals to making medication at a West Columbia plant landed him at the White House. He attended the anniversary of a job and work training program, called Pledge to America’s Workers, led by the president’s daughter.

Earlier this month, Secretary of Education Betsy DeVos visited Nephron and heard of Childs’ journey from the security shed to the chemistry lab. DeVos likely passed it along to Ivanka Trump and President Donald Trump, Nephron CEO Lou Kennedy said.

Childs attended Allen University in Columbia on a football scholarship. The Spartanburg native majored in chemistry to challenge himself and be different from his teammates. While in school, he started working as security guard for area hospitals.

But after graduating in 2008, he still struggled to find work in his field.

“While I was working security, I was able to do my homework,” Childs said. “The recession was about to hit ... and a lot of people weren’t hiring at the time. Chemistry jobs were out of state, and I had young kids.”

A pharmacist heard Childs mention his chemistry background and suggested Childs apply to Nephron. Feeling like he was not ready for a job using his degree, he became a security guard at the pharmaceutical maker.

“At least it’ll be a foot in the door,” Childs said he remembered thinking.

Kennedy did not realize a top apprenticeship candidate was already outside the building.

“I always thought of him as just a nice guy, always did his job, always says ‘hello’ to me,” Kennedy said. “One day he leans his head out the (security guard) window and says, ‘Ms. Lou, I’d like to be considered for that program.’ ”

Kennedy signed him up after hearing about his background.

Today, Childs makes medications that are in short supply, which, according to Kennedy, is “the hardest thing (she’s) ever tried to do.”

“It requires specific movements and motions and handling,” Kennedy said. “It is not easy at all.”

Now that he’s completed the apprenticeship, Childs has accepted a job as an analytic chemist in Nephron’s chemistry labs.

“It was one of the best decisions I think I ever made,” Childs said.

Kennedy was the first South Carolina executive to sign White House’s Pledge to America’s Workers, where she promised to create 490 jobs, internships and apprenticeships. Nephron’s pharmacy tech apprenticeship is one of those programs. Others include student internships and jobs for over 650 S.C. teachers.

Childs represented one of a few dozen companies from across the country whose employees went to the  event to share success stories.

“Today we highlight the impact and the stories of lives transformed,” Ivanka Trump said at Thursday’s event.