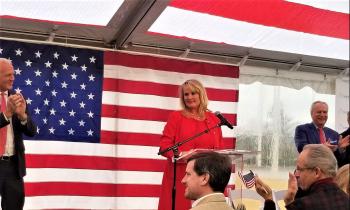 Nephron Pharmaceuticals Corporation (Nephron) CEO Lou Kennedy today announced five percent increases for all employees with the exception of commissioned employees.  The raises are a direct result of the Tax Cuts and Jobs Act that was signed into law last week by President Donald Trump.

"We are excited that the Tax Cuts and Jobs Act has given us an opportunity to recognize their hard work and sacrifices with well-deserved raises," said Lou Kennedy, CEO of Nephron.

"I am grateful that the tax cuts House Republicans worked so hard to pass have had an immediate impact in the district," said Congressman Joe Wilson. "I congratulate Lou and Bill Kennedy, as well as Nephron's entire team, on today's announcement, and I wish them continued success."

Nephron is a manufacturer of respiratory and compounded 503B outsourcing medications that employs 640 people in West Columbia. The company, which launched 34 new products in 2017, recently announced a $12.5 million expansion and expects to add 125 additional employees by June 2018.

Fifty percent of Nephron employees attended South Carolina universities or technical colleges. Nephron founder Bill Kennedy and CEO Lou Kennedy are University of South Carolina graduates and South Carolinians. The company is part of the life sciences industry in the State.  This industry has a total $11.4 billion annual impact on the State economy.

For more information about Nephron, visit http://www.nephronpharm.com or contact Lou Kennedy at 407-491-9755.