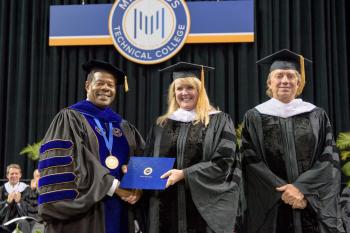 Kennedy, CEO of Nephron Pharmaceuticals Corporation, received an Honorary Associate Degree in Humane Letters for her service as a community leader.  The award recognizes outstanding service within the community, through philanthropy and achievements beneficial to citizens.

Lou, with her husband Bill Kennedy, made a $1 million donation to Midlands Tech in 2014 to build the William Jerry Wood Life Skills Center.  The center offers training to students so they may develop essential life skills including communication techniques, work ethic, financial literacy and leadership.

“Students can visit the center and say ‘help me write my resume,’ or ‘help me prepare for this interview,’” Kennedy said.  The goal is to ensure students will be career-ready upon graduation.

Midlands Tech plans to build a Life Skills Center at each of their seven campuses.

The donation from the Kennedys was the largest gift by an individual in school history at the time of contribution.  Solomon Jackson, an MTC alumnus, gifted MTC $1.25 million in 2015 to be used for scholarships.
Jackson was also awarded an Honorary Degree Wednesday night.  He and Kennedy are the first and only people to receive this award from the college.