ICYMI: SC women celebrate a century of having the right to vote, call on more women to seek office 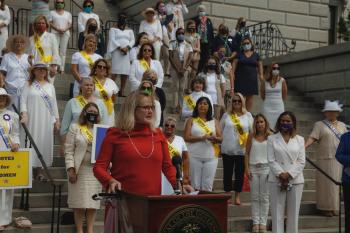 A century after women across America gained the right to vote, a bipartisan group gathered Tuesday on the Statehouse steps to celebrate the glass ceilings shattered by South Carolinians while recognizing the state still lags in female representation. …

Lou Kennedy, the president and CEO of Nephron Pharmaceuticals, recalled what activist Eulalie Salley, then 85 years old, said at that bill’s signing in 1969.

“Well, boys, I’ve waited 50 years to tell you what I think about you for taking so long to pass this,” Salley, one of the state’s first female real estate agents, said while standing next to then-Gov. Robert McNair.

“We can relate to what Ms. Salley said back then,” said Kennedy, who noted she’s often the lone woman in a business meeting.

“There are still obstacles each of us face along the road to equality. I’m encouraged that, today, little girls know they can be CEOs, university presidents, board chairs, governors, senators, lieutenant governors and they can run for president of the United States. But we still have work to do,” said the former chairwoman of the state Chamber of Commerce.

“As we celebrate 100 years of women voting, we should also remember to lift as we climb,” she continued. “Empowering young women to pursue careers in businesses, the life sciences and, yes, elected office. The only way we’ll see more women serving in office is if more women run for the office and vote.”